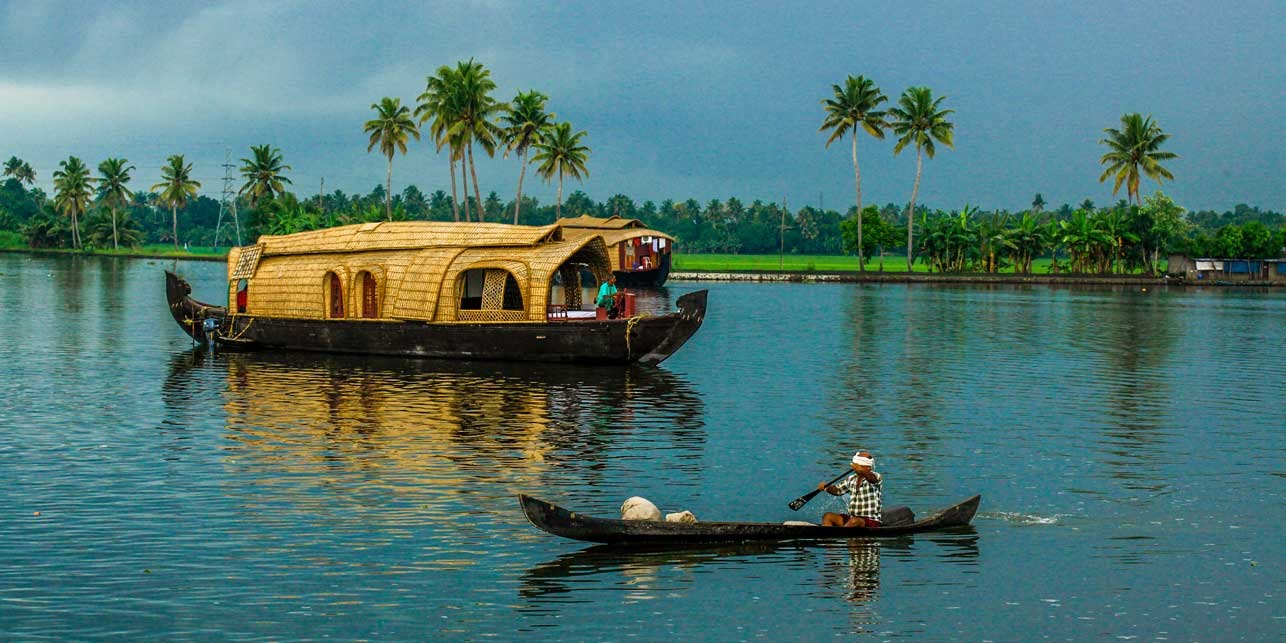 Referred to as East Venice, Alappuzha has always enjoyed an important place in Kerala's maritime history. It is now famous for its boat races, backwater holidays, beaches, marine products and coir industry. Alappuzha Beach is a popular spot for picnics. The pier, which extends here to the sea, is over 137 years old. Entertainment facilities at Vijaya Beach Park add to the beach's attraction. Nearby there is also an old lighthouse that greatly intrigues all visitors.

The houseboat cruise is another delightful experience while in Alappuzha. In fact, the houseboats you find in Alappuzha's backwaters are a reworked version of the Kettuvallams of ancient times. Kettuvallam is a Malayalam word,' Kettu ' refers to housing structures and' Vallom' means boat. In the older days, kettuvallam or thatched roof boat covering wooden hulls was used to carry tons of rice and spices.


Of late, houseboats come back equipped with all the comforts of a decent bedroom together with equipped bedrooms, fashionable bathrooms, cozy living rooms, a room and even a balcony for sportfishing.You can enjoy an uninterrupted view of life in the backwaters while staying in a houseboat.

Alappuzha, Kerala's beautiful destination is also historically important. Alappuzha is also known as' Eastern Venice.' The story behind this name's origin is very interesting. During the British Era, Lord Curzon visited Alappuzha (Alleppey) and, seeing the beauty of this place, he addressed Alappuzha as' Eastern Venice.' Kuttanad, Kerala's 'rice-bowl' was known from the Sangam periods themselves. It is said that the early' Cheras' were known as' Kuttuvans' because they had their home at' Kuttanad.' You can see the ancient Alappuzha in the litrary work, 'Unnineeli Sandhesham.' Other than this stone inscriptions and historical monuments in temples, churches, etc. give some evidence of Alappuzha's history.

Raja Kesavadas, the architect of modern-day Allappuzha, had a very humble beginning. He was born in Kunnathur on March 17, 1745 in Travancore's former state as the son of a peasant woman and police constable. His parents named the Kesavan boy. Very little is known of his early childhood. Although he lacked formal education, he displayed a high degree of shrewdness, intelligence, honesty, and industriousness. A local merchant named Poku Moosa Marackar was so impressed by the diligence and temperament of the young boy that he employed him in his firm as a tally clerk.

As Poku Moosa was a rich and influential merchant, he made regular visits to the royal palace. It happened that the young Kesavan once accompanied Pokku Moosa to the royal palace. Poku Moosa was on very cordial terms with Travancore's then Maharaja, Karthika Thirunal Rama Varma, who was affectionately called as Dharmaraja by his subjects. The Maharaja was very impressed by Kesavan's intelligence and hardworking nature that he soon promoted him in his service and gave him more and more responsibilities, which Kesavan carried out in the most efficient way. The confidence and faith that the king reposed in Kesavan was fully justified. Dharmaraja found in him a god sent emancipator to save the country from the prevailing troubles and turmoil. Joining Dharmaraja and Raja Kesavadas together was an epoch-making event in Venad's history.

Kesava Pillay had a very rapid rise while serving the king and reached its climax when, by a proclamation, the king made him Valiya Divan in 1789. The then British Governor, Lord Mornington, gave him the title of Raja in appreciation of his administrative talents. But out of humility he linked his name to the word Dasan and liked to be called Raja Kesava Dasan at the center with his own name. He was also a well-trained solider and led the army several times under Captain Dillanoi. Raja Kesava Das became Travancore's army chief after Dillanoi's death and was credited with victory over Tipu Sultan in Kaladi's battle.


His greatest accomplishment, however, was his contribution to creating Alappuzha one in all the busiest ports of the time ANd developing an inland canal system for transport and navigation.He found Alappuzha very suitable for geographical and oceanic reasons. Being a far-sighted statesman, he knew the importance of having a port town to trade with Western countries. Raja Kesavadas was unique in having such a beautiful vision, far ahead of his time. He was very successful in making his dream come true and the first ship embarked at Alappuzha in 1786.

Raja Kesavadas made further progress in attracting businessmen from different parts of the country including those from Bombay, Gujarat, Rajasthan, etc. He encouraged them to settle in the land and gave them all the favors they needed to set up their business and build their industrial empire. For the easy transportation of goods to the port as well as to the western countries, two parallel canals, the commercial canal and the vadaicanal with the ramifying waterway system were built.