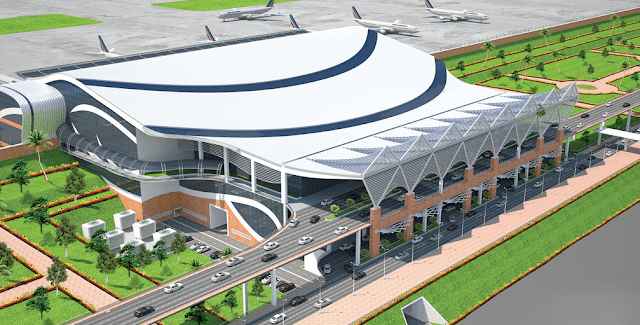 Kannur is a beautiful town located in the northern part of Kerala State, India, also known as Cannanore. Kannur, a beach town, is the largest town in the northern region of Kerala and the administrative headquarters of the district of Kannur consisting of many towns and villages including Thalassery town (called Thelicherry during the colonial era), Kerala's first heritage town due to its historical significance.

Kannur was often referred to as the "crown of Kerala" because of its natural treasures edged by the Western Ghats in the east, Kozhikode and Wayanad districts in the south, Lakshadweep Sea (Laccadive Sea) in the west and Kasargod in the north. Kannur is popularly known as the city of Looms and Lores because of the district-functioning loom industries and ritualistic folk arts called Theyyam held in temples. Kannur has a rich culture, history, and traditions that are often connected with this region's many scholars and legends.

On Sunday 10 December 2018, Kannur International Airport Limited (KIAL), the second greenfield airport established under the Public-Private Partnership (PPP) model in the Kannur district of Kerala near Mattannur, was inaugurated.

Kannur is considered one of the best tourist spots in North Kerala as Kerala offers many popular tourist destinations. Kannur, on the other hand, is the fourth largest city after Kozhikode, Thiruvananthapuram, and Kochi. According to the latest survey, Kannur district's total population is 2.5 million.

It is estimated that 13 percent of the district population is currently employed overseas, which is expected to increase is a considerable rate in the coming years. Kerala's government has developed Kannur's Fourth International Airport, which is being built, owned and generated by Kannur International Airport Limited (KIAL).

The Government of Kerala has promoted Kannur International Airport Ltd to build and operate International Standards Airport in Mattannur, Kannur Dist, North Kerala. In particular, to meet the needs of the region's large NRI population, which frequently travels to various international destinations, the thriving business community and tourists. The area has immense tourism potential and attracts both domestic and international tourists.

32.86 % by Government of Kerala
22.54 % by State and Central Public Sector Undertakings
9.39 % by Airports Authority of India
35.21 % by others, including QIBs, Individuals, Companies, Cooperative, Banks/Societies,   and other legal entities as approved by the Board of Directors from time to time.

This will be the second greenfield airport in Kerala to be built on a model of the Public Private Partnership in an area of about 2,000 acres. The land will be acquired by the State Government through KINFRA, the Nodal Agency, and transferred to the Company in a phased manner. Nearly 95 percent of the airport's construction work was completed.

The runway's orientation is 7/25, and the runway length of 3050 meters has been completed. In the future, this will be extended to 4000 meters. The Passenger Terminal Building, measuring about 97,000 square metres, is in the final stages of completion.