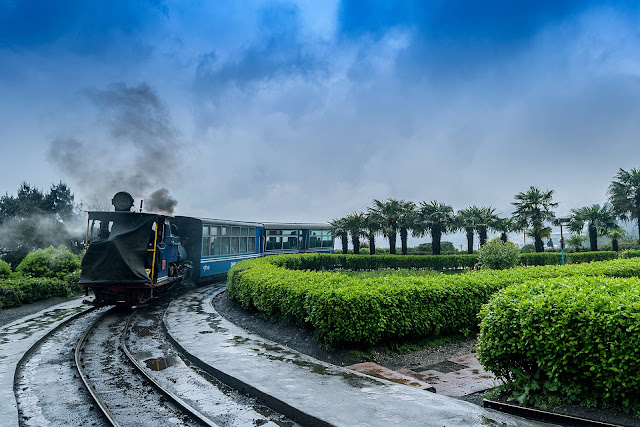 Reasons for Inscription: The Darjeeling Himalayan Railway System is the amazing illustration of the colonial era's technical and cultural characteristics. These trains demonstrate distinct stages of technical developments in the country's hills.

The Darjeeling Himalayan Railway, also known as the' Toy Train,' connects New Jalpaigudi with Darjeeling. It goes through Ghoom at an altitude of about 2258 meters. This train's fantastic structure includes six reversed zigzags. The Toy Train is no longer an essential means of transportation; however, due to its exclusive historical importance and tourist appeal, it has continued to exist.

The Darjeeling settlement really started with British interest in 1828. By 1835, the establishment of a sanatorium for the invalid servants of the East India Company was segregated from Sikkim. It then consisted of an observatory hill monastery clustered with about 20 cottages and a population of about 100 individuals. Planning started in 1839 to lay out the Darjeeling town and build a hill road linking Siliguri, Pankhabari, Kurseong, and Darjeeling. At the same moment, the evolution of hotels started, the first being that of The Darjeeling Family Hotel, followed by other hotels. By 1840, Darjeeling City had about 30 buildings and a few respectable houses.

In 1878, Franklin Prestage, Eastern Bengal Railway Agent, foresaw the usefulness of a rail connection between Darjeeling's mountains and the plains. His plan was motivated primarily by difficult financial factors, i.e., the enormous difference in the price of vital goods between Darjeeling and Siliguri, the need to export tea and the failure of the current highway to manage increasing traffic. He presented a plan for the building of a two-foot railway line from Siliguri to Darjeeling.

In a comprehensive plan presented to the Government of Bengal and endorsed by Lt. Governor Sir Ashley Eden, he pointed out how a railway could significantly decrease transportation costs between Darjeeling and the plains. Rice, which sold at Siliguri at 98 a ton, Cost 238 at Darjeeling! He was also confident that the building price of the 2-foot railway line would not be prohibitive and that locomotives, tiny but strong enough to climb steep gradients, could be engineered

Prestage was finally sanctioned for his project on April 8, 1879, and established the Darjeeling Steam Tramway Co. However, the concept of working the line as a steam tram was quickly abandoned and, on September 15, 1881, the firm accepted the designation of Darjeeling Himalayan Railway Co. (DHR), which remained efficient until it was taken over by the Free India Government on October 20, 1948. Throughout this era, Gillanders Arbuthnot & Co., one of Calcutta's oldest managing houses, addressed its economic, legal and buying interests.

During British rule, the Darjeeling Himalayan Railway was a wing of North Bengal state. It is a tiny gage railway that follows the hill cart road and passes through it at a periodic interval. This train now has a diesel system. If a tourist wishes to enjoy the prehistoric journey of a beautiful blue steam engine, he should bring the train service from Kurseong.

The train features first-class coaches with big windows and weather allowing that turns out to be a distinctive and pleasant travel experience for the traveler. The trip gradually unfurls some of nature's most beautiful splendors. The spellbinding panorama of the Kanchenjunga Mountains is disclosed to the tourists when the train reaches its highest point in Jorbunglow (2438 meters).

The train does a complete circle at the Batasia Loop just beyond the Ghoom. This loop is the most striking of the three loops that cross the way.

The train leaves Siligudi at 9 AM and reaches Darjeeling at roughly 3 PM. Some tourists consider this trip a true test of strength, particularly after an all-night trip from Kolkata to Siligudi. Tourists who don't want to take this long trip can take a steam train trip from Kurseong or can also enjoy a brief trip from Darjeeling to Ghoom. This trip involves only 7 kilometers away and one can either walk or take a bus, taxi or train to return to Darjeeling.