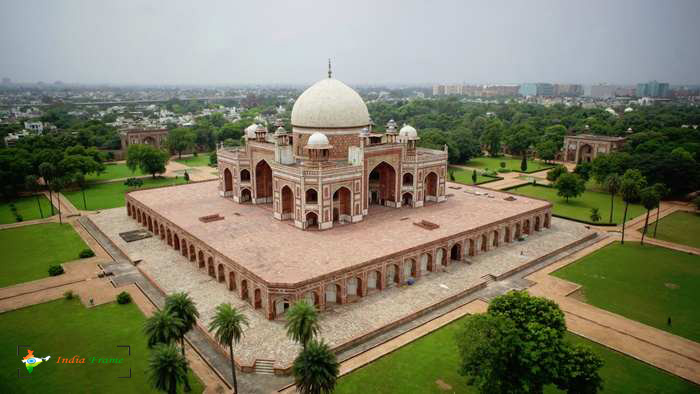 Reasons for Inscription: In accordance with criteria (ii) and (iv) the Tomb of Humayun has been included in the UNESCO World Heritage Site list. The reason behind this beautiful building has to do with the reality that it exemplifies the formative phase of Mughal architecture.

The tomb is also a specimen of a double-dome structure with large-scale kiosks. The Mughal style of the garden tomb was first implemented in this tomb, which used to include the causeways and canals around it.

After Humayun's death, his eldest wife Bega Begam took the initiative to build this tomb. Mirak Mirza Ghiyath, a Persian architect, was employed in 1569 to build this magnificent monument. This red sandstone tomb is built in the middle of a square garden divided into four main parterres known as Charbagh.

The mausoleum is situated on a high, wide and terraced platform. Across the sides, tiny arched cells add architectural significance. It is intended as an asymmetrical octagon with four long and four brief sides.

The 42.5 m high double dome is made of marble and is lined with solely sculpted chhatris (pilled kiosks). The interior is a spacious chamber with an octagonal form and a domed roof compartment. Once again, the chamber is interconnected with galleries and corridors. The entire structure is made of red sandstone with white and black marble boundaries.

Humayun died in 1556 AD after falling from the stairs. He was laid to rest in his palace in Purana Quilla, Delhi. Hemu, the Hindu General and Chief Minister of Adil Shah Suri of the Suri Dynasty, assaulted Delhi after his death.

In order to preserve the sanctity of the remains of their Emperor, the retreating Mughal army exhumed the remains of Humayun and took them to Kalanaur, Punjab.

After her husband's death, the grieving Queen Bega Begum set out for Mecca to make a Hajj pilgrimage and vowed to construct a splendid mausoleum in his memory.

She used the services of a Persian architect, Mirak Mirza Ghiyas, who came from the Herat region of Afghanistan and had an impressive repertoire. Bega Begum not only commissioned and paid for the construction of the tomb, but also oversaw its construction. 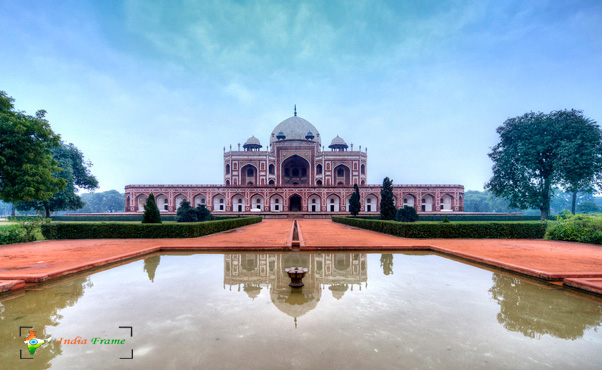 The grandeur of this amazing building gradually decreased owing to a lack of maintenance, as the money in the royal treasury of the shrinking Mughal Empire dwindled. In 1880, after the establishment of the British rule in Delhi, the adjacent garden was redesigned to house an English-style garden.

It was, however, restored to its initial style in a significant restoration project between 1903 and 1909. The complex and its buildings were strongly defiled when it was used to house refugees in the partition of India in 1947.

The most recent phase of restoration began in 1993, when the tomb of Humayun was declared a UNESCO World Heritage Site by the Indian Archeological Survey (ASI) Aga Khan Trust for Culture (AKTC).

How to Get There

The best part of Humayun's Tomb is that it is situated on the outskirts of Delhi City itself. So for tourists to Delhi, Metro is the most convenient mode of transportation. Jor Bagh is the closest metro station where you can hire any personal car to reach the tomb site.

There are quite a few rail stations to reach the tomb of Humayun. You need to reach New Delhi Railway Station or Nizamuddin Railway Station for that. Pre-paid vans can be hired from the railway station.

The capital of the nation, Delhi, is centrally linked to all the main towns of the nation. Get off at Kashmiri Gate ISBT or Anand Vihar ISBT and hire a convenient car to get there.